A Villager in Cuba - Si, This is Cuba

My first 24 hours in Cuba were filled with lessons that set me up for the rest of my travels. It was baptism by fire and I was completely overwhelmed. But I caught on quickly and figured out not just how to survive but how to have the best time possible in Cuba.

Allow me to talk you through the lessons from my first 24 hours.

My first authentic Cuban taster came at the airport. While in line to go through immigration, there was a blackout. The entire airport lost power for about five minutes. Eventually the lights flickered on, the computers fired back up and no one blinked an eye. The only crumb of acknowledgment came from a mystery voice in the darkness that said “Si, this is Cuba”.

On the way to my accommodation (which deserves a blog post all of its own) my taxi driver, Joel, stopped near the Malecon to buy me a snack. The food cart merchant asked me “Where are you from?” and when he found out I was Australian, he listing everything he knew about the country “Sydney! Kangaroo! Skippy! Olivia Newton John! Crocodile Dundee!”. Popular culture in Cuba is about 30 years behind. I heard some brilliant Australian references but in my entire trip, the most recent one I heard was “Sydney 2000 Olympics”.

While much of my trip was left open, there were a few things I had spent the last 6 months meticulously planning. One of those was my first salsa lesson in Havana. On my first morning I ask my casa host, Gabriel, if everything is ready for me to meet my dance professor. He replied, “Oh she decided she can’t teach today. And she takes Friday, Saturday, Sunday off, I’m sorry.” “Can you help me find another teacher? I can pay more!” I asked. “Maybe?” Gabriel considered the idea for a moment. “I can try.”

Si, this is Cuba. You’ve got to with the flow, because there really isn’t another choice.

But, instead of attending my planned salsa lesson, I spent my first day wandering around the city alone. Streets in Havana are narrow and lined with crumbling pastel terraces with people pouring out of them. Locals sit on the steps and balconies and talk from afar. As much as I tried to fit in, I knew I always stood out in Cuba. It also meant that I would constantly have men talk to me or about me as I walked around the city. It was never aggressive, but always a little suggestive. I asked someone about this once while sharing a park bench and he explained through a thick Spanish accent, “If we see a beautiful woman, it’s our duty to point it out. What if she doesn’t know?” I came to ignore the constant air-kisses and cat-calls and to remember that Cuban men fall in love too easily.

Later when I was back at my casa and deciding what to do that evening, my taxi driver Joel from the airport unexpectedly arrived on my step with a translator. The translator explained that he wanted to get to know me better and asked if he could take me out for a drink. So I went. The three of us drank beers at a dirt-floored, open-air bar with chickens running about our feet. It was a bizarre evening, but I had a great time. The lesson here, an important one for anyone visiting Cuba, was to go with the flow. Say ‘yes’ and see where it takes you. I was so glad I had drinks with this pair, although the “I love you” I received at the end of the night as we bid goodbye was a little full on. Si. This is Cuba.

The view from my Havana accommodation 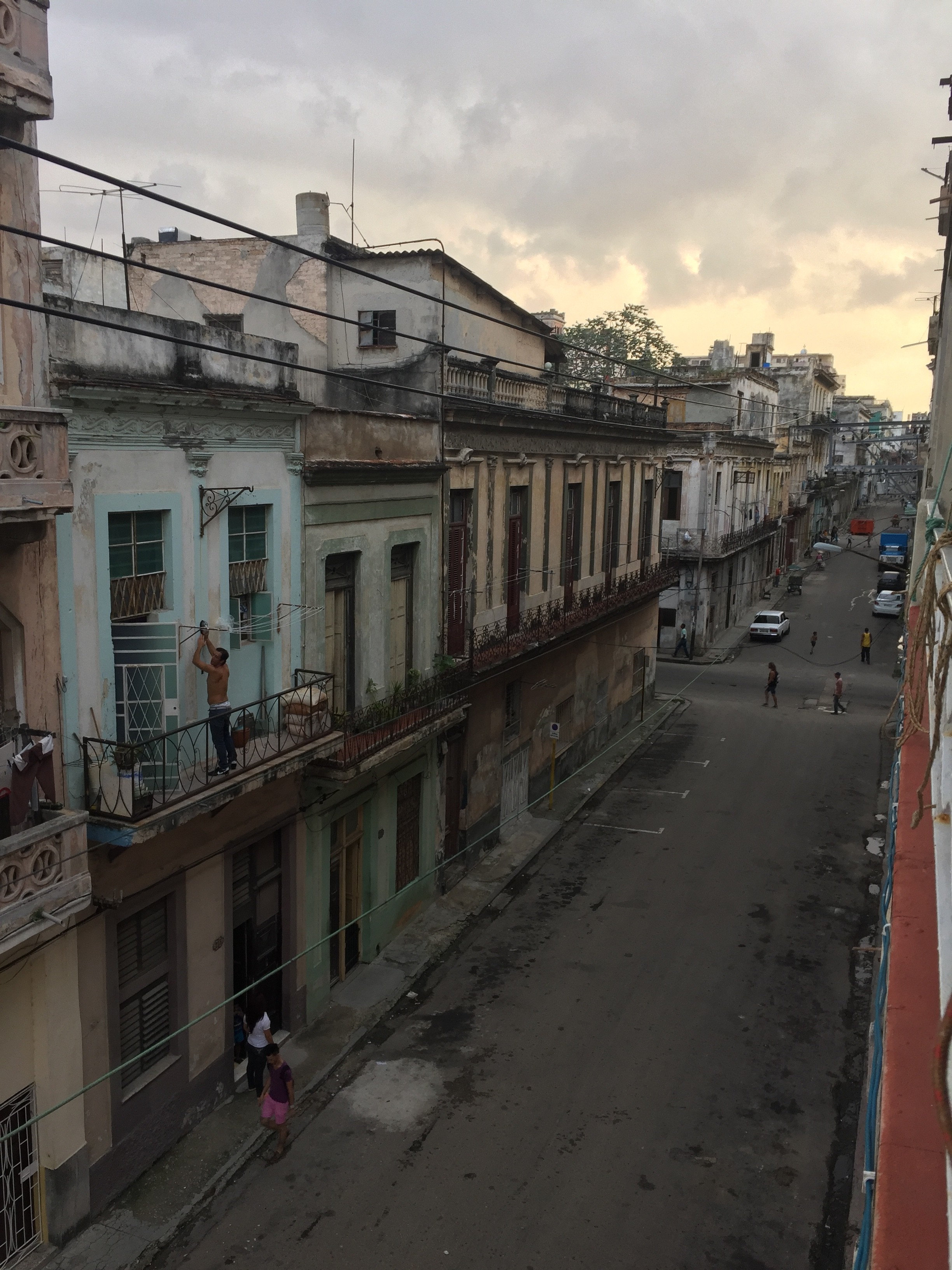 The view from my Havana accommodation