South Africa is well renowned for its appalling crime rates (50 murders and 178 rapes every day) but what is less known is  that Capetown has taken over from Johannesburg as the crime capital. The city’s Longstreet is famous for its vibrant nightlife but it is also gaining an unwanted reputation for the growing number of street crime incidents - and the people have had enough.

The Safety Lab, a social innovation test centre and ad agency Y&R Capetown created an innovative campaign to take back the street from the criminals.

Using the street’s myriad of CCTV cameras, operators were instructed to look out for crime incidents in real time. Footage and details of the incident were immediately sent to a team on the ground. That information was then projected onto a moving billboard which was moved to the exact location of the the crime incident. 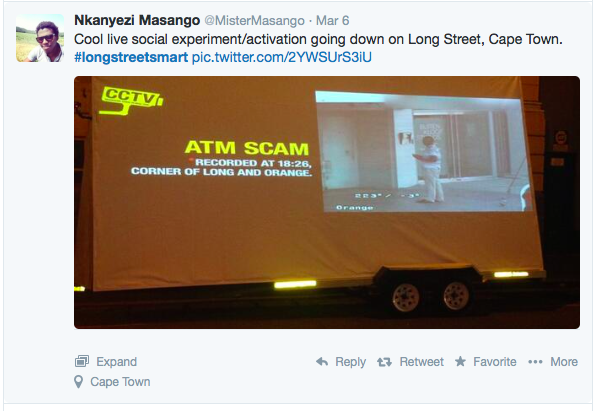 People in the street could then see the incident taking place in the same place and time that they are in. They were now aware to look out for crime such as ATM scams. 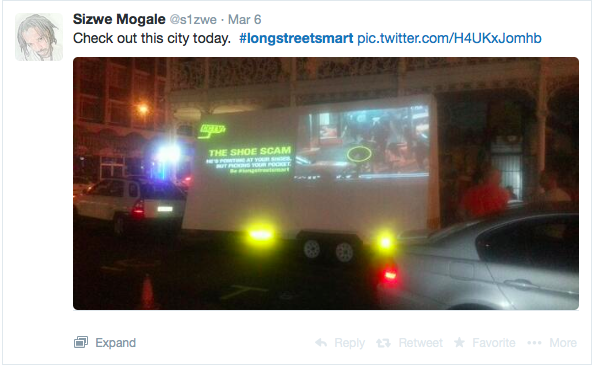 ‘The shoe scam’ was another crime incident that passers by now knew to look out for.

Twitter followers also had a place to share information and report incidents that they themselves came across.

It is early days for the #longstreetsmart campaign and it will be interesting to see the effect it has on the street crime. No doubt it has increased awareness of crime generally and people are more knowledgable of what to look out for. #longstreetsmart is already a great example of government agencies working together with creative thinkers to solve social issues.