Marketing isn’t just a bolt-on that comes at the delivery end of product development. It’s not the aim and fire stuff: promotions, “getting the word out”, clicks, hype, putting lipstick on the pig. As Seth Godin asserts, many amateurs and citizens believe this is what marketing is. It’s not. The circles of marketing: 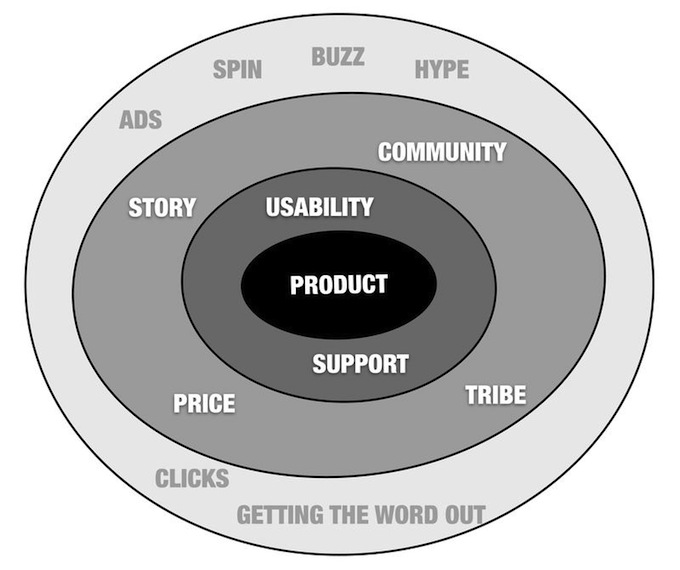 The innermost circle is the product or service itself. When the thing you sell has communication built in, when it is remarkable and worth talking about, when it changes the game - marketing seems a lot easier. Of course, that’s because you did the marketing when you invented the thing, saving you the expense and trouble of yelling about it.

Early stage marketing is doing the marketing when you invent the thing. It lets you bake in the communication and helps your product or service sell itself. We’ve blogged this a few timesThe company knew exactly what to expect from Via, now a $180 million brand.

Nike’s Fuelband and Apple’s iPod were also prototyped, tested, and iterated based on feedback and results. Nike’s first shoes were made on a waffle iron; now athletes are deeply involved in developing and testing prototypes. Apple prototypes extensively with customers as early as possible. In the words of Steve Jobs:

People don’t know what they want until you show it to them.

The minimum viable product has just those features that allow the product to be deployed, and no more. It finds the fastest, most cost-effective way to build a salable product that delivers on a basic idea and induces a reaction from prospective customers. It’s also been described as “purposely launching an imperfect product”. By way of example, PowerBar was created in 1986 for a few thousand dollars and achieved mixed results. The creator knew the product wasn’t optimal, but:

By getting feedback on an early version, he was able to modify it, changing the package and marketing strategy to build a following among athletes and weekend warriors. PowerBar eventually became a $150 million business, creating the $1 billion energy bar category.

For digital prototyping and testing, Lean UX and agile development provide suitable pathways to rapid prototyping and useful customer testing. Here’s the Nordstrom UX team creating, testing, and building a new iPad app in one week. It’s a useful app to support in-store sales and improve the customer experience. You don’t need to be Nordstrom to pull this off. If you have access to customers and people with the right skills you can do it.

Early stage marketing is a proven commercial model for successful product development and sales (References: Nike share price and Starbucks share price. Comparison: RIM share price). It also lowers product development and R&D costs not only by failing fast, but by launching fast and confidently - speed to market is achieved with a thoroughly tested product customers want. The minimum viable product can help you get there.