Role of technology in tourism

Here are some recent digital tourism initiatives we like, why we like them and how technology fits.

I’m speaking at a digital event in Newcastle tonight. The event is called ‘The role and impact of technology in tourism and hospitality’ and is hosted by The Lunaticks Society of Newcastle, the crew behind the new Digital Newcastle initiative. I was working on some notes for my brief talk last week and thought the references could make an interesting blog post. So here we are.

I was asked to talk about the Newcastle App, an iPhone app I created 18 months ago. The app gives visitors a local’s guide to Newcastle, was created following personal experiences couchsurfing around the world and hanging out with locals, and the need came from Lonely Planet ranking Newcastle as a top 10 city for 2011. It was created to solve a problem for an influx of visitors. The first version of the app was the minium viable product; the simplest solution to the core problem. A basic usable prototype. People used it, liked it and asked for more. The second version is a more complete prototype and is still far from what it could be. 5,588 people have installed the app. Over the past month, the average session time is 3 minutes and 45 seconds. Not bad, could be better. The marketing plan and next release haven’t been actioned yet (did someone say ‘client work’?).

So that’s the app. I could talk more about who it’s for, how it supports tourism and what it could be. But let’s talk about the role of technology in tourism. Here are some recent digital tourism initiatives I like, why I like them and how technology fits: 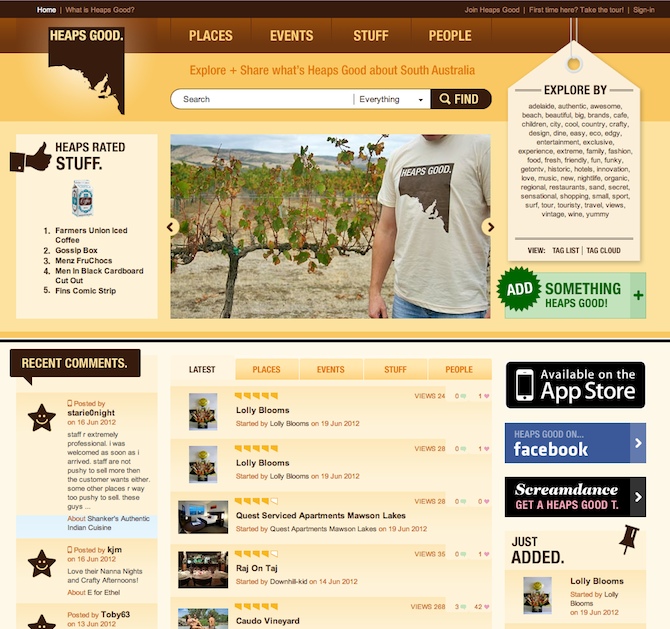 We reckon South Australia has heaps of good bits, but not everyone knows about them. This site lets South Aussies say which bits they reckon are better than good. It’s also a great way to find out about a heap of good stuff you never knew was here.

Advantage SA fearlessly promotes the key advantages of the state through the development and execution of a number of important campaigns, programs and initiatives.

Fearless. When you’re fearless you can make stuff that’s awesome. The site showcases places and events in South Australia and drives through to operator websites (which of course should have online booking and other mandatories). 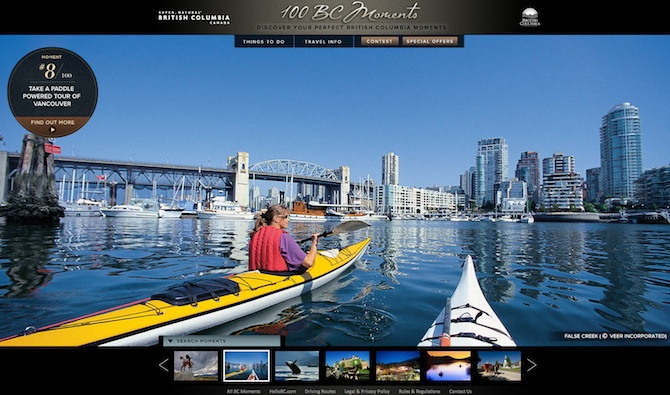 100 perfect, super natural British Columbia moments. Each moment includes trip planning, packages, deals and accommodation ideas. Some moments are typical, others are unexpected. All of them look pretty fun. Operator websites are listed for online bookings. There’s a campaign including a 14-foot tall, 10-foot wide vending machine in San Francisco dispensing mountain bikes, kayaks and made in BC surfboards.

People who visit Gothenburg usually climb aboard a guided bus or boat tour to see the city. The app lets visitors take a fully guided tour for the price of a tram ticket. Visitors travel on a tram with locals and the app is geo-aware; things they can see are explained, landmarks are highlighted and history is recited. The app was developed using the tram company’s API (Västtrafik). I don’t think the trams have wifi but it looks there are hotspots along the tram line that passengers could use.

Websites, online booking platforms, search engine optimisation, social media engagement and mobile apps are almost the price of entry for tourism groups and operators. There’s an opportunity to do these things extremely well by creating a premium and useful customer experience to achieve results (bookings, enquiries, sales, other goals). But for potential visitors to engage with a tourism website, app or social media channel, someone’s already done a brand job on the destination, activity, accommodation or event. A search-optimised website with a booking platform won’t get people to a destination or event if they’re not aware of it.

Going beyond website, app and social media channels to develop APIs and expose up-to-the-minute useful data is great thinking. The Swedish Tram Sightseeing App is one example. Seattle’s One Bus Away app is another; it’s built on transit system APIs and is open source. I’m sure there are more, and will be more. While the technology is awesome and important, there’s still an idea leading both of these initiatives. Creating an API is one thing. Solving a problem for people is a separate challenge. And the job of creating Gothenburg and Seattle as destinations has already been done. Without someone doing a brand job on the destination there’d be no tourists to provide apps for. No one would be there. No one would be searching to go there. There’d be no awareness, and no problem for technology and an idea to solve. Technology has an important role supporting marketing initiatives but by itself it’s not the solution.

A few other noteworthy mentions for use of technology (and ideas) in tourism:

Relevant local data based on other tourism reports for Newcastle and the Hunter Valley: